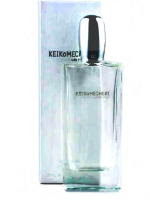 Here's what Wikipedia has to say about "sanguine":

"Sanguine indicates the personality of an individual with the temperament of blood, the season of spring (wet and hot), and the element of air. A person who is sanguine is generally optimistic, cheerful, even-tempered, confident, rational, popular, and fun-loving. They can be daydreamy to the point of not accomplishing anything and impulsive, acting on whims in an unpredictable fashion. Sanguines usually have a lot of energy, but have a problem finding a way to direct the energy. This also describes the manic phase of a bipolar disorder."

Here's what I have to say about Sanguine, the perfume from Keiko Mecheri:

First, the notes differ depending on where you look. Luscious Cargo mentions blood orange, spices, and white florals. The Keiko Mecheri site (and they should know, right?) lists blood orange rind, petit grain, and musk. I find the last sentence of the Wikipedia definition most interesting, because it reflects this fragrance perfectly: manic or bipolar.

The image I get in my head while wearing Sanguine is that picture of the woman they always show students in Psych 101, or the HR shows to employees when they conduct any sort of training at all, the drawing that appears to be an old, witchy looking woman or a beautiful young lady, depending on how you look at it. Sanguine has a couple of personalities: one is an industrial-strength citrus air freshener for commercial use, while the other is a spicy deep citrus with undertones of white florals...in other words, a perfume.

I'm a huge fan of neroli or orange blossom in a fragrance, and so the blood orange note in this scent was intriguing to me. It's quite potent in this mix, overly so, and I'm guessing it's the oil from the rind, that bitterness that sometimes permeates the lighter side of citrus, that adds to the industrial feel of this scent. It's definitely orange, orange with a large stick. Yet sometimes it moves from industrial air freshener into candied rind (overly sweet) and then into a deeper spice I wish would stick around. I definitely detect a white floral element in this, even if the Keiko Mecheri site doesn't list it. The most depressing part of this is that if this part of the scent would stick around, it could give Serge Lutens Fleur d'Oranger a run for its money, or at least be its musky counterpart. Catching those whiffs is like catching a glimpse of the beautiful woman in the picture for just a second--when you're fixated too much on the old woman, the beautiful lady refuses to appear.

*photo from LusciousCargo
Posted by priscilla at 3:09 PM

Other Blogs I Enjoy